Things to know when Navigating in the hills 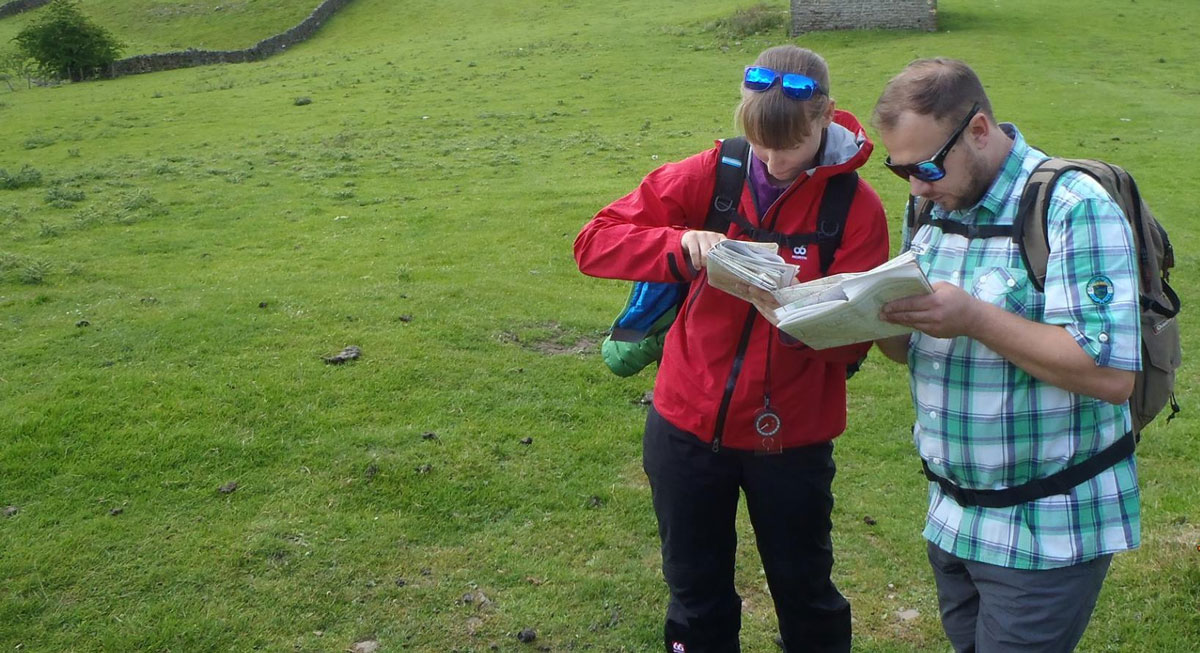 Always check the weather as late as possible ( Changes- these are key to weather watching. Note the direction of the wind when you start and the type and height of the clouds. Do the same with the temperature and barometric pressure if you have a device for doing this. Note pressure also reduces with altitude so if climbing you need to take this into account. It gets 1 degree colder per 100m of ascent. If there is a change then something is happening, generally a cold or warm front is approaching or passing or has passed.
Where is the Low Pressure area? In the northern hemisphere if you stand with your back to the wind the low pressure is on your left.

A low (anticyclone or depression) rotates anticlockwise and high vice versa. The weather ‘flows’ from high to low. Hence the term filling. Imagine them as two cylinders of water joined by a pipe at the base. You can always see the direction of spin by the fronts. All weather systems in the world move from west to east. Notice that the wind direction is not along the isobars (line of constant pressure akin to contours). The wind flows into lows and out of highs.

Warm Front- mass of warm air rising up and over cold.

The closer they are steeper the ground is.
Contour Intervals
1:25000 OS maps- the contour spacing is 5 or 10 metres, with every 50 metres being slightly thicker- the index line.
1:50000 OS maps- every 10 metres with the index every 50 metres.
1:40000 Harvey maps- every 15metres with a thick index contour line every 75 metres.
Be aware on very steep ground (above 27degrees/ 48%) the intermediate contour lines may start to be dropped but the index contours remain.
Slope angle or gradient- To calculate the steepness of a slope over a given distance, simply divide the height gain by the distance and then multiply by 100 to get a percentage. Slopes are not uniform, so a 30% slope may map sections that are steeper.

Terminology- summit, ring contour, valleys (Dales), spurs, re-entrants, ridges, saddles, gullies, knolls, depressions. Other natural features such as crags, limestone pavements, shake holes, scree, boulders.
Being able to interpret map contours to determine the slope angle, aspect and shape are essential skills. Contours allow you to visualise the landscape. Landform is one thing that remains constant in the countryside- walls, buildings and paths may change but hills do not.
Slope Aspect
Take the compass. Stand perpendicular to the contour and point directly downhill in your immediate vicinity.
Note the bearing.
Then place the compass on your map.
Generally there is only one possibility

Top tip- Use a digital watch.
A good way to get better at is to time when walking over the first hour and then later in the day. You can then get used to calculating timings for different speeds. Normally you are quicker by yourself and slower the larger the group size.

When working out timings remember Naismith’s Rule when walking up hill add 1 minute for every contour line up. He also said every 3 contour lines down add a minute. However we find this inaccurate so we suggest you just stick with adding 1 minute per contour line up.

Compass
Just out of interest 360degrees is not the only compass system. There are also Grads (400), Mills which in France is 6400, in Sweden 6300 and Russia 600. The Warsaw pact countries used to read their compasses anticlockwise. One Mil subtends 1m at 1km and was and is used for artillery work.

When you might use a compass?
• Setting the map in low visibility or in a woodland
• Walking on a bearing in low visibility or darkness
• Taking a back bearing to check accuracy
• Locating on route using a spot or linear feature or transit
• Checking which path to take in featureless terrain
How might you use a compass?
Ground to map
• Point the direction of travel/ edge of compass at an object or along a transit
• Align the magnetic needle with the orienting arrow
• Reduce the number of degrees at the index mark by the amount required for magnetic variation (this is always changing check key in map for more details on variation)
• Place the compass on the map and rotate the whole baseplate until the orienting lines are parallel with the grid lines.
• Ensure the orienting arrow is pointing to Grid North (ignore the magnetic needle)
• Slide the compass up and down the grid lines until the edge of the base plate passes through the symbol of object you believe it to be.
Map to Ground
• Known starting position (point A)
• Known destination position (point B)
• Place compass on map with base plate flat against the map
• Line up base plate with points A & B with direction of travel arrow pointing towards point B
• Turn compass housing/bezel so that orienting lines on base of compass housing line up with a vertical grid line on map, ensuring that that orienting arrow is pointing to the top of the map
• Once orienting lines aligned with vertical grid line, remove compass from map and note the degrees reading at index mark
• Allow for magnetic variation – do this by adding the appropriate value* to the value at index mark. You now have a magnetic bearing.

Using the bearing
• Hold the compass in the correct position and rotate your body so that the north (red) arrow is contained within the orientation arrow of the compass housing
• Look ahead of you and draw a mental line in the direction of travel arrow of the compass
• Pick out anything that’s easily in view that you can walk towards. It could be a rock, a tree or anything distinguishable
• Walk towards that object and repeat until you reach your destination

Note: if the weather is fine and clear it may not be necessary to continually identify objects and walk towards them, for example where you have good visibility of ‘point B’. Your reason for taking a bearing could be to check that the direction you suspect to be correct is actually correct.

Dead reckoning- timing, pacing and compass combined (poor visibility)
Aiming off- in poor visibility. Deliberately aim to miss your target when aiming for a linear feature. When you hit it you already know which side of your destination you are on.
Bearing along a linear feature- rules out virtually all other linear features on the map.
Handrail- make life easy. Ideal in poor visibility or for coarse navigation legs.
Attack point- aim for a more significant feature close to your destination. This is sometimes the changeover point between coarse and fine navigation. Pacing may come into this remember not to pace for more than 500m.
Relocation
It is ok to make an error we all have and all do time to time. The most important thing is getting back on track safely. Do not be afraid to go back to your last known location even if it was over an hour ago.